After resisting tempation for a few years, and spending far too much time scouring web adverts for large format gear, I’ve finally taken the plunge and purchased a large format kit.

The new development which moved me from an observer to a participant in the LF world was the availability of the Intrepid 4 * 5 camera – a very lightwood field camera made from birch ply, by two guys in Brighton, which sells for just £250.

It helps to understand why this camera is a big deal if you know that the market for large format cameras includes:

a) A few new cameras such as the Shen Hao and Chamonix brands which sell new either side of the £1000 mark.

b) Many other options costing a lot more than £1000

c) Second-hand monorail cameras or metal-bodied press cameras, likely to weigh 2-3 times as much as the Intrepid, and possibly a few decades old, perhaps selling in the £175 – £350 range.

I ordered my Intrepid on 31st March 2017 and it arrived on 15th June – so I had a ten week wait which I tried to fill by learning as much as I could from Youtube and books, and shopping for lenses, film, developing reels, and film holders.

I wanted to keep my equipment relatively minimalist since I didn’t see much point in getting a lightweight camera and then carrying half-a-dozen lenses. I decided to get two lenses  – a 150mm f5.6 Nikkor “standard” and a 90mm f8 Fujinon wide-angle, matching approximately the focal lengths I use most often with other formats. With 35mm and medium format, I have occasionally used a longer lens in the 90-135mm equivalent range, but never for more than 10% of images, so I’m going to try to manage without that option in large format.

I’m not going to attempt to review the camera; since I’ve never handled another large format camera, let alone used one, I’m in no position to make comparisons with other cameras. There’s lots of reviews on the web, including a video by Ben Horne on Youtube and a blog review by Richard Pickup.

However I can make some comparisons with the Mamiya RZ67, which is the only other camera I own that has some camera movements. The RZ achieves limited shift and tilt movements courtesy of an adaptor, which cost me more than than the Intrepid camera, and then only for closeups, unless you use one of two short barrel lenses (75mm and 180mm) which can focus to infinity when used with the shift-tilt adaptor. I had the 75mm version.

In comparison to the RZ outfit, the Intrepid adds a greater amount of vertical shift and tilt, plus swing and horizontal shift. And of course the negatives are much larger … but the most striking difference is that the Intrepid is much lighter than the RZ – not only the camera itself but the lenses are much lighter. I haven’t made an exact measurement but I reckon my Intrepid plus two lenses weights at most one-third of the RZ, shift-tilt adapter, and two lenses. Indeed when the Intrepid arrived I wondered whether there really was a camera inside the box !

Results from the Intrepid – so far

For my first use I just went into the garden to start to get used to handling the camera. I loaded up some Kodak TMax 100 and took two shots. The first was an image of some dried teasels, and I managed to mess up the exposure and focussing – but the second – three courgettes from my wife’s allotment – was much better: 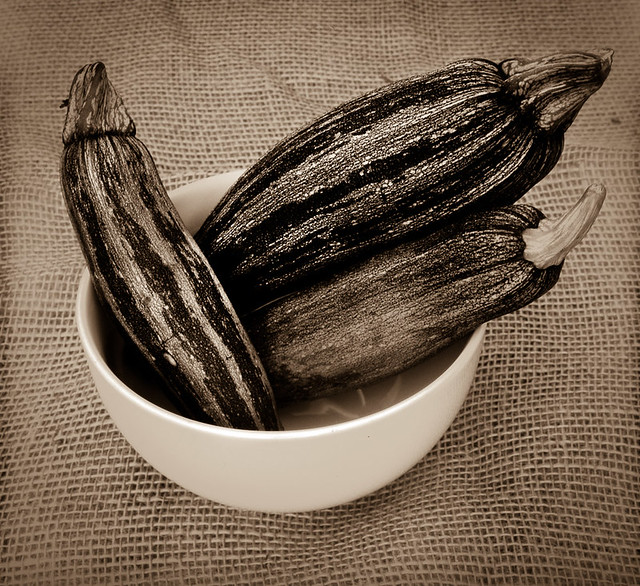 The toning and the vignette were added in Lightroom. I’m not in a position to do darkroom prints from large format right now, as my enlarger only goes up to 6x7cm, so I’ll be scanning them in the foreseeable future, with the option to send a scanned file to Ilford Lab for them to make a silver gelatin print.

The next step was a trip out the house, to Hexham Abbey in Northumberland. I had taken photos at this location a few times before, most recently with the RZ and 75mm lens, but couldn’t quite get the coverage of the high spaces that I wanted, so I was keen to return here with the wider angle of view offered by the 90mm lens on 4×5 and a greater range of movements. 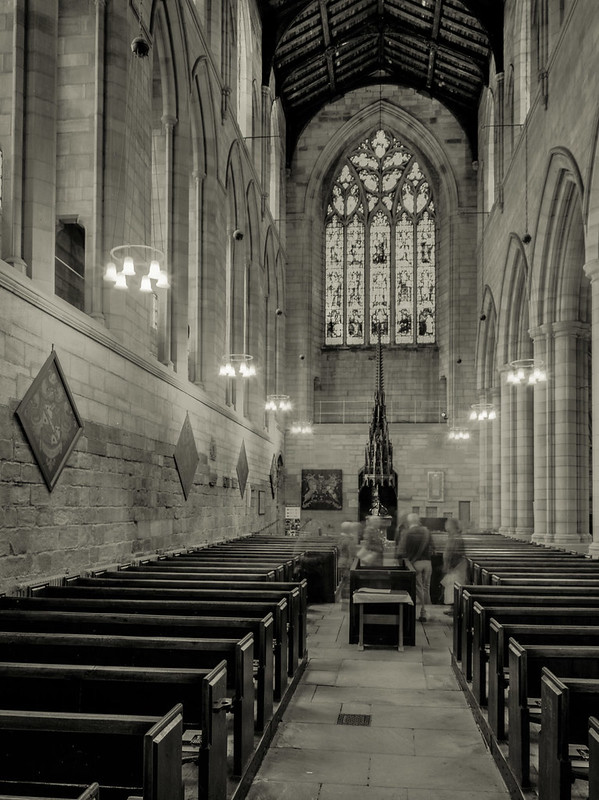 The first image is shown above. When I started to set up, the people you can see where waiting to go down on a tour of the crypt; then they moved away so I thought I would be able to take the image without people; but I was still fiddling with the camera when they returned from the crypt. In the end I like them being in the image in a ghost-like fashion (it was a 3-minute exposure) but the process did make me realise how long it was going to take to set up a large-format shot.

In particular it took a long time to make sense of the dim upside-down image. Of course I had read how I should expect the image to be dim, especially with a wide angle lens, but the reality still came as a surprise. Adding a fresnel lens is something I’ll probably do soon to brighten up the corners of the image on the ground glass. 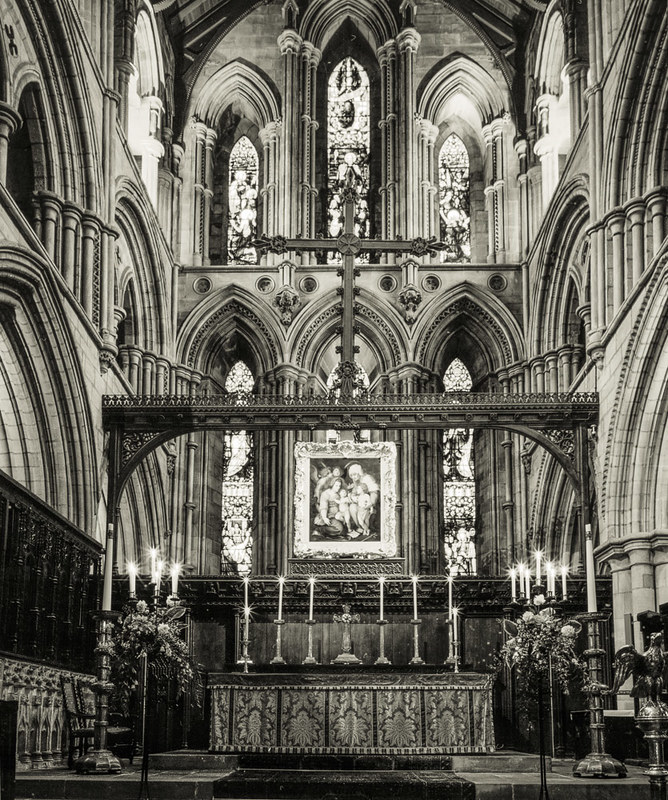 I was fairly pleased with the amount of detail in the image above, and the effect of using shift to keep the verticals straight, but I inadvertently put some backwards tilt on the front standard, the result being that the upper third is less sharp than the rest. Also the whole image wasn’t straight as I just hadn’t been careful enough in ensuring that the camera was set square.

The Intrepid doesn’t have a built-in spirit level. It is possible to place a hot-shoe spirit level on top, but I’m never sure how accurate those things are. I’ve since purchased another spirit level with a base of about six inches which should give a more dependable measurement and will be trying to ensure I use it before each exposure.

I developed the film in Kodak HC110 developer, using a Jobo 2500-series tank combined with the 2509n reel which can take up to 6 sheets of 4×5 – although I won’t be trying to load more than 4 sheets until I’ve had more practice in loading the reel. This system is very frugal in terms of the amount of chemicals needed – a minimum of just 270ml. Using HC110 dilution B, only 9ml of developer concentrate makes 300ml of working solution.

I hadn’t originally expected to use Jobo reels for large format developing, because my existing 1500 series tanks and reels don’t take large format, and the kit isn’t cheap to buy. However, after reading a discussion on the film section of Talk Photography, I realised that I could use the bottom part of a print reel I had acquired with my Jobo CPE2 processor, as the tank for 4×5 negs, once I’d removed the print cup and swapped a funnel from another tank. They I just had to buy the 2509n reel so the cost was half what I expected.

And then a minor disaster

My next trip out with the Intrepid started out at Budle Bay, where I took one shot after scouting around for over an hour, then I drove to Holy Island (aka Lindisfarne) to get over the tidal causeway before the tide came in and left me stranded for five hours.

That’s when disaster struck…. as I set up the camera on the tripod, I twisted the camera to tighten up the connection between the tripod plate. That connection was a 3/8inch – 1/4inch adaptor (the Intrepid takes a 1/4inch tripod screw) which I had bought some time ago, probably too cheaply to guarantee an appropriate level of quality. The screw sheared off and broke inside the camera’s tripod screw hole, so that I could neither get the remaining piece of screw out, or screw in any alternative device. So now I was left with 4.5 hours to spare before I could get off the island, and no camera.

(Well actually, I did have with me a little Olympus 35RC rangefinder, loaded with Agfa Precisa CT100 slide film, so I was able to take some images, just not large format images).

At this point I was pretty gutted, having waited 10 weeks for the camera, and exposed just 6 frames, to now have a unusable camera. I should make it clear that there was no fault of the camera, I blame the poor quality of the adaptor screw combined with my overtightening of the connection.

I’ve been in touch with the Intrepid company and arranged to send the camera in for repair, which will necessitate removing the tripod screw receptacle. In the meantime, my large format journey has been shunted off into the sidings !

I’m looking forward to getting the camera back and resuming that fascinating journey.