The latest addition to my camera collection … for the princely sum of £1 … a Coronet Twelve-20 dating from about 1950. This style is sometimes called a “fake TLR” since superficially it looks as if there are two lenses at the front like a Twin Lens Reflex, but the top unit is just a very simple viewfinder, whereas a proper TLR has something approximating to the quality of the lower “taking” lens

I had been looking for a simple box camera to see what they were capable of producing; I was interested to see what kind of results the average family snapshotter could achieve in the days when they were produced. I’d seen a few that had very dirty viewfinders, or seemed overpriced, so I was pleased when, on a trip to Tynemouth Market, I found that the Classic Photographics stall had about 8 or 9 box cameras all priced at a pound … I purchased the Coronet Twelve-20 on the grounds that it could take 120 or 620 film (some take only 620 film) and it had more than one aperture … a range of err, two apertures actually, f16 and f22. 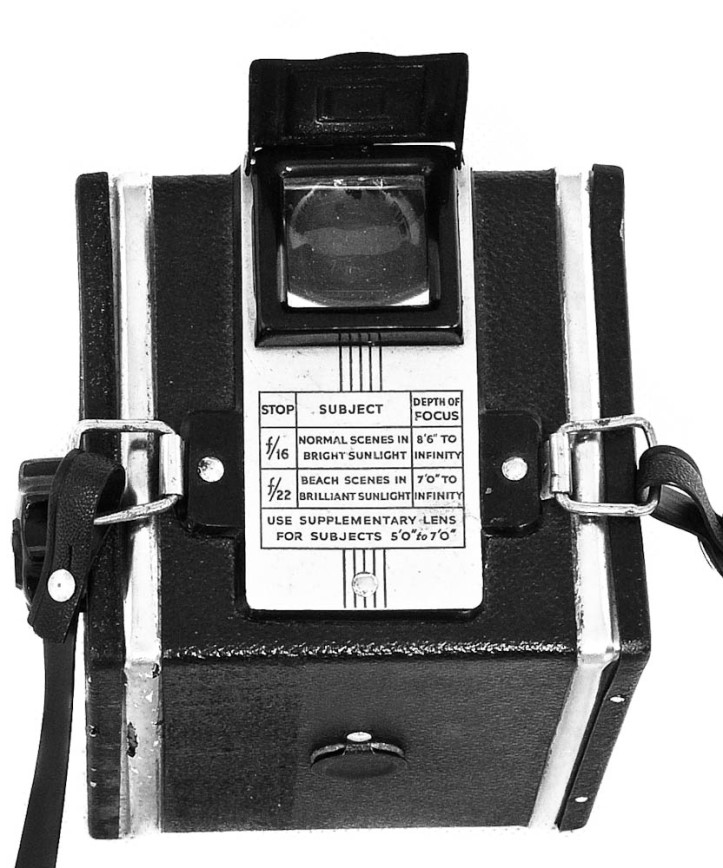 Focussing is fixed, and the closest object in focus is 7 feet at f22, or 8’6″ at f16, so any kind of closeup is completely impossible.

Now I had to make a decision as to what film to load, to produce the best chance of success with a limited range of exposure settings (the aforementioned two apertures and one shutter speed setting). The exposure time of the shutter was not shown on the camera, but I figured it was between 1/25th and 1/50th of a second. How did I work that out ? Well, if you apply the “Sunny 16 rule” to a bright day, that would give you an exposure of 1/100s at f16 for an ISO100 film,  or f22 at 1/100s for a beach scene with sunlight reflecting off the sand. But the camera was made around 1950 and at that time ISO25 film would probably have been considered “medium speed” and there may not have been much ISO50 film available. So I figured that the shutter would have been set around 1/25s – 1/50s, assuming the use of film speeds between ISO25 – 50, for the aperture guidance on the top plate to make sense.

I guess the manufacturer assumed that their target audience would mostly be taking pictures on their summer holidays by the beach – exposures in dull weather would have required much faster films.

The top lever in the above image shows that there is a “time” or bulb setting; but since there is no tripod bush I can’t see myself using this feauture. To change the aperture to f/22, you pull out the middle lever, and the bottom lever is the shutter release.

The slowest film I had available was ISO100, namely Kodak T-Max, and since I have quite a few rolls of TMax I didn’t want to buy something slower just to test the camera. Ilford Pan F (ISO 50) should work well but I’d be reluctant to use the only ISO25 film I know, Rollei Pan 25, as it has a reputation for being curly and therefore difficult to load into reels and then scan.

In order to reduce the amount of light coming through the lens to make the combination operate more like an ISO 50 film, I borrowed a yellow filter from my Zeiss Ikon Contina, turned it backwards, and stuck it on with Blutack, matched with a lens hood for good measure.

So what were the results like ? My first roll was a disaster because the camera fell out the back of the car and the back came off, ruining the film. For my second roll, I taped up the camera with black duct tape and took it on a family outing to Druridge Bay in Northumberland, ending up in Warkworth. 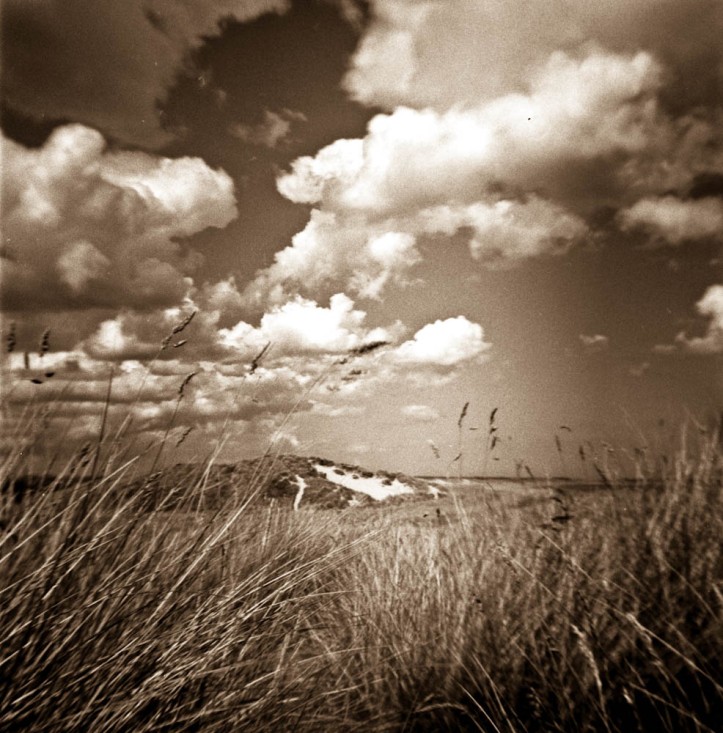 I found that the viewfinder wasn’t as easy to use in bright light, as my first viewing at Tynemouth Market suggested. Whilst I could see big objects OK, more distant objects like people or horses in the middle distance, I just couldn’t see at all. 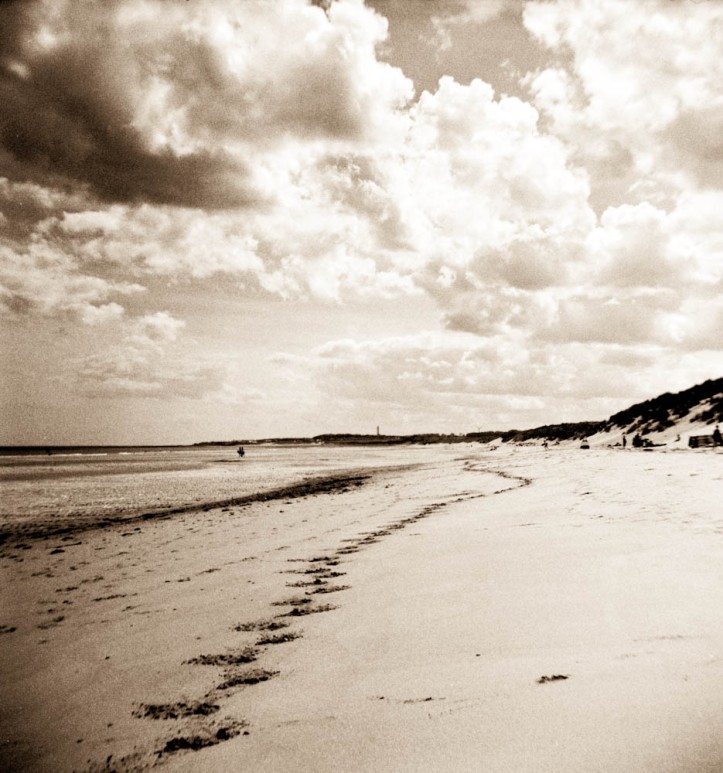 I like the results, which after scanning I sepia-toned in Lightroom; when I get round to a darkroom session I may try some “proper” sepia toning. They were a bit flat on first scanning, but some increased contrast and the toning, which seemed appropriate for the period of manufacturer, helped give them more spark and character. 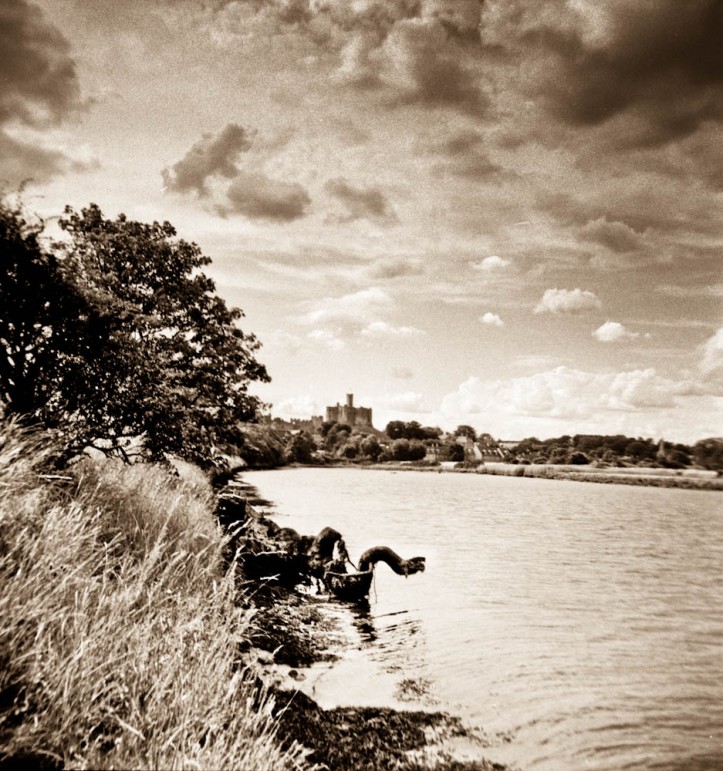 It’s worth remembering that at the time the camera was produced, most customers would be paying from prints of no more than 6 inches square at the most, more typically perhaps 4 inches, so the small amount of magnification required masks issues relating to lens quality. You could liken the results to a Holga, which would also typically have just a couple of apertures – but since a new Holga costs about £40 I prefer the Coronet for £1 !