After leaving Central Square South (previous post) my next step on my Heritage Open Day itinerary was the Newcastle upon Tyne Literary and Philosophical Society – usually abbreviated to the Lit & Phil. 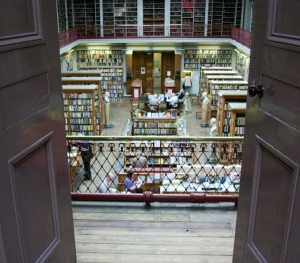 The Society was founded in 1793 and now includes the largest private library in England outside of London, housing 150,000 books. The society hosted the first demonstration of the “Geordie” miners safety lamp in 1815, invented by George Stephenson, and the lamp is on display in the building. It also contained the first public room in the world to be lit by electric light, as part of a demonstration by Joseph Swan, inventor of the incandescent light bulb.

The list of prominent members of the society in the nineteenth century is a roll-call of the most prominent scientists, engineers, and thinkers of that age. They include John Dobson and Richard Granger, who were responsible for the design and construction of many fine buildings in the city and wider north-east; also William Armstrong, inventor, industrialist, weapons manufacturer and benefactor of hospitals (a strange mix to my mind). Robert Stevenson, locomotive designer and bridge builder, and son of George, was President of the Society from 1855 to 1859.

On this occasion I arrived with my camera backpack and large tripod and I envisaged that it would not be practical to carry this equipment round on a public tour. I was invited to leave the equipment in an office, and did so; the photos shown here were actually taken on a previous visit.

The glass ceiling was added around 1900 after a fire in the building. One of the things I like about this photo, is that if you look carefully, you can see a man reading in the small committee room which is at the far end of this view on the upper floor.

Members of the public can join the library for a subscription, and can visit for free (report at the reception). There are also tours of the building at other times throughout the year – see the Lit & Phil website for contact details.